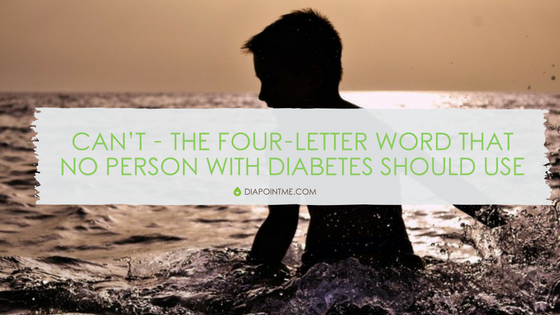 A little while back, someone in the Diabetes Online Community suggested we write about a particularly inspirational topic.

There are so many things a person with diabetes can do. Diabetes should not stand in anyone’s way. So I want to share an experience I wrote about last year. Although it happened some time ago, I still feel very strongly about this subject.

When A Child With Diabetes Says “I Can’t”, It’s Heartbreaking.

About a year or two after diagnosis, my son who has diabetes told me that he could not do something. He said “I can’t”. I do not even remember exactly what it was he thought he couldn’t do, but all of my hair stood up on end.

I explained to him that “can’t” is not a word we use.

And it wasn’t just one of those “we don’t use that word” instructions that I said once and was done with it. I spent quite a while driving home my point to him. I’m not sure if he got it at that time. In all fairness to him, he was just being a whiny three-year-old that day, as three-year-olds do.

I emphasized the word so much that later, when he was frustrated putting together the cute little car track he had, those tracks became fondly known as “tries”.

I’m not a pushy parent who has visions of my child being a concert pianist, World Cup football hero, Olympic swimmer or otherwise. I am not a perfectionist. But this diabetes thing makes me very afraid of that 4-letter word.

I strive for a child who is healthy and happy and who daily overcomes his diabetes to live a normal, full and healthy life. If he becomes a superhero along the way, so be it. He CAN do and be whatever he wants to be.

Diabetes Is Not An Excuse To Stop Trying

One of my biggest fears is my son using diabetes as an excuse to stop trying. We do not create an environment for that to happen. We do not refer to diabetes as a crutch. Because it is not! There is no reason why diabetes should stop someone from trying a new activity or following his or her dreams.

I know this is a concern a lot of parents have when their child is newly diagnosed. What about the future? Can my child be normal?

I am here to tell you, yes they CAN.

Consider careful discussion and planning with your educated doctor (i.e. endocrinologist) and diabetes team before you just decide, “I can’t”. Do your research and find other people with diabetes who “can” and “did”. There is a lot to learn from their experiences. While Wikipedia is not always considered the best source of truth, here is a list of a few people with Type 1 Diabetes who didn’t say “I can’t” to get you started.

Has your child with diabetes ever told you that they “can’t” do something because of their diabetes? How did you respond?