When Your Child With Diabetes Is Scared Of Needles 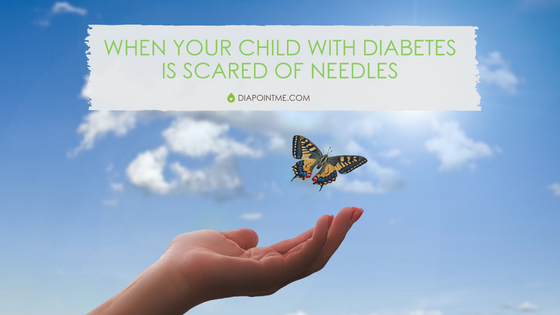 Even though children with Type 1 Diabetes put up with several needles of different kinds daily, the blood draw is a difficult one for many.

My son was quite young at diagnosis, so finding those little veins has been difficult. So difficult that at diagnosis, the neonatal nurse in the hospital struggled to draw blood from his little 20-month old body.

Years after that, other phlebotomists and determined physicians also struggled. As a result, his fear of needles has been even greater than it might otherwise have been.

What can you do if your child with diabetes is scared of needles?

My son’s fear of needles is one situation that stumps me. There is nothing I can really do or say that will make his anxiety go away, or make it easier for him. We just have to do it.

You may ask why we have to keep drawing blood. He is already diagnosed. Unfortunately, there are many other diseases that are common in people with Type 1 Diabetes. Other autoimmune issues happen. Some of those include thyroid conditions, Celiac, Addison’s or other diseases.

Every parent of a child with diabetes of course hopes the blood work gives a good result because these kids already have so much to deal with. But it is critical to discover and start treating other chronic conditions early should they occur.

My son has annual blood monitoring. Because he is scared of needles and because it’s such a draining day (in more ways than one), our recent blood work appointment was long overdue.

Being the brave boy that he is, he got through it, but it was not easy at all. He sat in my lap and I tried to talk him through it to keep him calm.

There were tears. A lot of tears. He begged God for it to stop.

After it was finished, we talked about it. He even felt that it was not as bad as it had been in the past, and that the phlebotomist who drew the blood did a good job. And of course she was clever enough to not call him a baby for crying as one nurse did in the past. Regardless, we were both beyond relieved that we do not have to face the dreaded needle for another year.

My child with diabetes is scared of needles, but that day he surprised me

That evening, my son asked if he could ask me a question.

He began… “You know how when you say you try to understand what it is I feel having diabetes?”

“What did you feel while I was getting my blood work?” he asks.

“I was sad,” I told him. “I could feel your fear, and I wished it were me instead of you.”

He then proceeded to tell me about Muhammad Ali and what he said about fear:

“You can’t be brave without fear.”

This left me even more speechless than his curiosity about what I felt during that difficult time.

I looked up the quote my son had told me to confirm if it was from Ali, and in what context he said it. What an amazing lesson it was about confronting fear!

In his book The Soul of a Butterfly, Ali talks about confronting fear.

Reading an excerpt, I learned that Muhammad Ali was afraid of flying. He shared all these scenarios he had in his mind around fear of his plane crashing. He seriously thought about passing on the 1960 Italian Olympics because of this fear.

Then he remembered what his father said: “‘Always confront the things you fear.’ I realize we are only brave when we have something to lose and we still try. We can’t be brave without fear.”

Even tough people must overcome fear

I rarely write anything so personal about how my son deals with his diabetes, but I asked for his permission to share this story.

I wanted to share it because it was is a really good lesson that even the strongest and toughest people we admire are afraid of something.

In the end, they win because they face it.

If your child has a fear of needles, the thing to do may not be to try to take the fear away. The thing to do is let them know it’s ok to be afraid, because even Muhammed Ali feels fear.

Carry on, my diabetes warriors!

Is your child with diabetes scared of needles? How do you help them when it’s time for blood work? Tell us in the comments below.