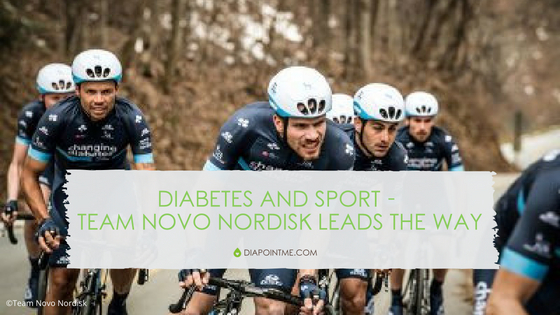 Never let anyone tell you that diabetes and sport don’t mix.

In early February, the professional cycling race the Dubai Tour was on again.

The Dubai Tour, which is in its 5th year, consists of 5 days of some of the most elite cyclists in the world touring the natural desert and mountains of the UAE. These athletes average about 170km per day.

I admit, I do not know much about the stages and how a 5-day intense cycling tour works.

But it doesn’t matter, because what I do know is that there is an entire team of people with diabetes out there kickin’ some you-know-what and taking names.

This is Team Novo Nordisk. Team Novo is the first professional cycling team to be comprised completely of cyclists living with Type 1 Diabetes.  All riders and several of the team’s staff also live with Type 1.

Although Team Novo Nordisk are spearheaded by the professional cycling team, the collective also includes runners and triathletes. Contrary to popular belief, diabetes and sport can very happily co-exist – even in gruelling long-distance events – and these athletes are living proof.

Cheering On Team Novo Nordisk in the Dubai Tour

While we could not get out to the start to cheer them on every morning, we were cheering for them as they took on some of the well-known landscapes of the UAE while we watched on television.

Even more fascinating than the TV coverage was learning how the team manages their blood sugars during the race.

We followed along on their Facebook page. This is inspiring for anyone trying to manage Type 1 Diabetes – either a recent diagnosis or someone several years into it. The cyclists’ blood sugar readings do not stay in a straight line. It is truly impressive how they manage all of this with the effort of physical exertion, staying hydrated and their nutritional needs.

After watching all this inspiration over several days, of course it was mandatory to take my son (who has Type 1 Diabetes) to the finish line to cheer for Team Novo. It was there that the Team Novo rider Quentin Valognes was awarded the overall UAE Intermediate Sprint Classification jersey on the podium.

No one standing near us had any idea what that meant, but it did not matter. A sportsperson with Type 1 was up there on the podium in first place! When the crowd near us heard me cheering and clapping loudly for Team Novo Nordisk, be sure all the others in close proximity to us got their applause game on.

The Inspiring Combination of Diabetes and Sport

I was so excited that the general public knew it had to be important. And as 10-year olds do, my son whispered to me, “Um, Mom, you can stop now. It’s a little embarrassing.”

After the awards ceremony, we went to a nearby café to eat. We were sitting outside, so during the dismantling of the finish line, I saw from afar what looked like a Team Novo jersey.

I asked my son if he wanted to go see if it was anyone from Team Novo to see if he could meet them. Without hesitation, he said yes.

As we got closer we saw it was Quentin Valognes and a few others from the Novo team. When I explained that my son was also a fellow person with Type 1 Diabetes, they stopped what they were doing and took the time to speak with him, take pictures, teach him how to capitalize on his Halloween candy with payment from me, and literally welcome him to their team.

I believe he was truly happy to meet them. This was an inspiring day he will never forget. While it is becoming more common, it is still not often that you get to meet a world-class athlete who happens to have Type 1 Diabetes – much less a whole team of them!

After some discussion we let them get on with what we hope was a restful afternoon, and we went back to our lunch. They were all very genuine, authentic and once again made my son feel incredibly special as they again said, “Welcome to the team,” before we parted ways.

We live with diabetes and on most days, it just “is”.

But I do believe that on that day I observed one of the first times in his life that my son felt his diabetes was somehow cool. For a brief moment, my child, who carries this burden with him every moment of every day, was able to truly feel like he was part of a very elite, special team.

To observe this, and articulate how grateful I am for this experience for him… I really have no words.

Team Novo’s mission is to inspire, educate and empower people affected by diabetes.

Be sure, on that day, and on all the days after, you did exactly that, Team Novo. Thank you.

Watch the recap of Quentin Valognes come from behind to win the UAE Intermediate Sprint Classification jersey at the 2018 Dubai Tour.

Get your guide to a safe and healthy vacation.

Success! Now check your email to find your gift. Meanwhile, head back to our website to discover more about DiapointME: www.diapointme.com