Dark to Light – A Close Encounter with a Diabetes Crisis 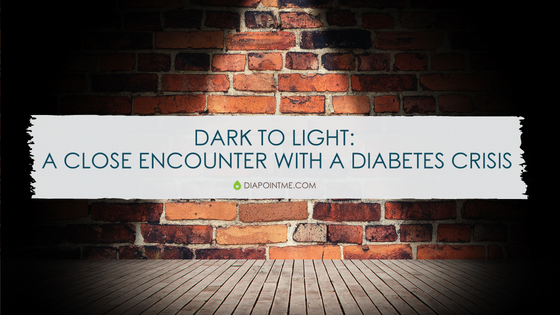 There are some days when diabetes insists on being the center of attention.

That’s almost every day. But sometimes diabetes insists you put everything on hold, and its obnoxiousness takes over.

This was one of those days.

And it’s never just one thing that seems to make those things happen. Those days always leave me with more questions than answers:

Is it a faulty sensor?

Is he avoiding calibrating because he didn’t want his pump to alarm at school?

Why didn’t I remember to cross check with a finger prick?

Was it what he ate for dinner?

Was it the buildup of high blood sugars since he had the flu?

It also definitely had a lot to do with the kinked infusion set. But as a mom, I step back and look at the whole thing for answers.

But… kinked infusion sets. We should have known better after an incident that put us in the hospital about 10 years ago with severe DKA. That was a nightmare because the ER and inpatient staff really did not know anything about diabetes and were coming to me, only two years into my infant son’s T1D diagnosis, for answers and education.

They found our ketone meter fascinating. They ran down the ward calling their colleagues to watch me change an infusion set, as they hadn’t seen that happen before. Oh, the irony. And one reason why we try our best to avoid hospitals in these situations.

Despite knowing that so much has changed, the fear of what some medical professionals don’t know is still palpable.

There are so many variables. Too many. Some are small, and some are definitely not so small. Some sit heavier on my heart.

Earlier this month, my son briefly mentioned that last year, a teacher called my son out on a few occasions because his pump was “annoying” when it would alarm.

Why yes, I’d agree: pump alarms are annoying. Diabetes is annoying. Very annoying. It could even potentially be the Oxford definition. Diabetes – Annoying condition that will never allow you to let your guard down for one second.

But it wasn’t until last night, months later, that I learned it was a bigger deal than just a teacher mentioning it one time. Either the way it was delivered one time was more than enough to humiliate him into silence, or she made this a bigger deal on more than one occasion.

As we sit here, the morning after that confession, with high blood sugars, ketones and a lot of vomiting, I can’t help but wonder if a statement from a teacher would influence a child’s diabetes care choices. Would telling a child in front of their peers that his pump is annoying and disturbing the class influence any behaviors or choices my now-teenaged son – or other child – might make to ignore high blood sugars, or silence alarms?

Would a child who was shamed because their medical device made noise program their continuous glucose monitor to read at a lower number to avoid being called out in this way?

They might. Peer acceptance is such a big deal for children in school, so I would lean toward beyond “they might” and say they probably would.

I learned that he didn’t, but all children with diabetes are humans with emotions. I wouldn’t blame anyone if they did. If in that situation, I might have made that choice too. To say that I am proud of him for not letting a teacher’s comments influence him to make a dangerous health choice is an understatement.

Recently, a parent who lives on the other side of the world mentioned something similar to me. She was headed to her child’s school to meet with teachers who were not supportive and making not-so-professional comments about her young child needing support to treat a low blood sugar. She needed validation from other parents in our community. She needed to hear that confronting the school about this was ok. And it is ok. Very ok, and necessary.

Even if your child doesn’t have a chronic condition, you have to advocate for them.

I once heard the author Glennon Doyle state, “It’s the parents (especially the moms) who call out the injustices in the world.”

How can they ever step confidently out into the world to become who they need to be if we can’t light the way?

Sometimes we have to be just as unapologetically attention-seeking as diabetes.

Diabetes still wins, but if we are even half as annoying as diabetes, we just might turn the dark to light.