Diabetes Stigma – The Work We Still Need To Do 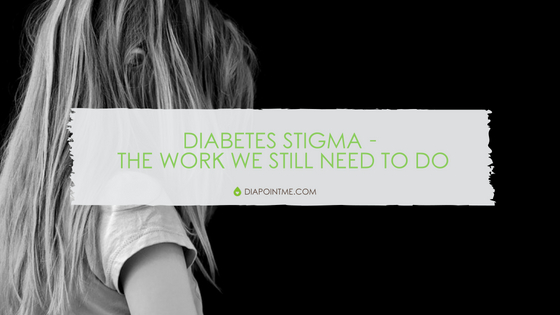 The diabetes stigma is alive and well.

Today my son called me after school. When I asked him how the day was, he answered his usual “Good.”

However, he proceeded to tell me that his friend had made a not-so-funny joke.

My heart sank a little… and so it begins.

The Diabetes Stigma Needs To Change

Now, my son has known the difference between Type 1 and Type 2 for some time. And he knows that people and movies make controversial jokes about diabetes all the time, and that they are just nonsense.

But in this case he has known the boy who said it for a few years, and in the context it was said, it was intended to be hurtful, even though this boy probably did not exactly realize what it all meant.

At times, everyone with diabetes will most likely feel stigmatized, no matter what type of diabetes they are living with. This alienation and judgment can arise from fearful misconceptions.

The Stigma of Type 2 Diabetes

People with diabetes, including children who have had it for several years, know that there is a clear distinction between Type 1 and Type 2.  Type 1 is autoimmune related and Type 2 is typically associated with an unhealthy lifestyle – which we also know is not always the case for everyone with Type 2.

The idea that Type 1s “can’t help it” and Type 2s “brought it on themselves” can lead to a prejudice that Type 1 is somehow more noble while Type 2 is shameful.

That prejudice was the basis for my son’s friend’s “bad joke”, which was intended to ridicule. He had picked up on the notion that to say that my son has Type 2 Diabetes would somehow be an insult.

There is much work to be done to erase this stigma.

The Truth About Type 2 Diabetes

Yes, in many cases the onset of Type 2 Diabetes strongly correlates with lifestyle risk factors that can be modified, such as diet.

However, there is also a strong genetic influence on the risk of developing Type 2. Even the research points to many different potential factors.

Age is also a factor (Type 2 most often develops in adults over 45), and it can also develop as a complication arising from other medical conditions.

Sometimes the onset of Type 2 Diabetes is a total mystery.

We need to address the widespread myth that Type 2 Diabetes is a “fat person’s condition”.

Aside from these other possible causes of Type 2, even if we hypothetically assume for a moment that it’s caused by a poor diet and unhealthy lifestyle alone, we’d be overlooking some important facts:

As you can see, in this world it’s often hard to be healthy, even when we want to be.

People with diabetes are no more to blame for their condition than someone with cancer or a virus.

Even if the boy in my son’s school did not really understand the deeper meaning of his comment, there is still so much wrong with this scenario.

We have so much more education to do than I thought. The discrimination and blame of Type 2 is starting so early.

In this case, my son did not say anything back to the boy. I’m not sure he knows a good response for this, and I am not certain I know how to teach him to properly respond.

If any parent asked me how to prepare their child with Type 1 or Type 2 Diabetes for the random, stupid comments that they will endure throughout his or her life because of diabetes, I would not have a perfect answer. Fortunately, it does not happen daily. But when it does happen, it can catch you off guard and it can be hurtful.

I was relieved to learn that the boy later apologized. But because my son did not respond, I was confused as to what made the boy change his mind.

I learned that a girl in class had come to my son’s rescue. She corrected the boy who had called him a Type 2, so he apologized. I am thankful that awareness education does seem to be reaching some kids, and no doubt my son’s presence in the class has helped those kids learn about the condition.

But more needs to be done. Please teach your children how to extend kindness and compassion to any person with a special need, and to defend and correct against prejudice.

The burden of diabetes, or whatever condition it may be, is more than enough to deal with without stigma and shame added into the mix.

People With Diabetes Are More Than Their Condition

To anyone reading this with any type of diabetes. Please know that you are more than your diabetes.

If you don’t have diabetes, please know that people with diabetes are more than their condition. Diabetes can happen for a whole host of reasons that are in many cases out of someone’s control. It is not just lifestyle related.

Be kind to one another. And, as Graham Nash so eloquently put it in the song from 1970, “Teach your children well.”

Learn about Lifestyle & Wellness Coaching for people with diabetes at DiapointME.

The Diabetes School Journal is now available! The ultimate tool for managing your child’s diabetes at school. Get 15% off when you order before December 31, 2018! Use this special code at the checkout: DSJ15